journal entry, May 24
[My hosts] left for Madrid on Wednesday morning, and the weather has pretty much been awful since then, [but] I have gotten out a bit every day. Three times now I’ve walked to the bakery for croissants, and yesterday I also went to the tabac (for postcards) and got some groceries. I especially like the fresh produce market. Maybe I’d eat more fruits and vegetables if they all looked so good.
*Note: a few days later I had zucchini! Baby steps!

email, June 4
Today I went into Toulouse all by myself! I bought a bus ticket, caught the right bus, made the right transfer at the metro, then explored the city. I got kind of lost a few times, but I was always able to find my way back to somewhere I recognized (even without using my map). I did a lot of walking, and I did some shopping, too. I bought a crepe for lunch (ham and cheese), then I found a cafe where I could sit out in the sun and have some ice cream (raspberry sorbet). I did all my communications (in the stores, getting food) in French, and I only screwed up once. I’m getting much better! Then I walked to the Pont Neuf, found a new metro station, and headed home.

in other news
I’m finding all these wines I just love, and so far I’ve had my dad checking for them at Dusty’s, but they’re so far unable to find distributors in the US. The one I’m drinking tonight was described to me as being halfway between a rosé and a red (it’s a Mauzac). It’s delicious. The wine region I’m right next to (in?) is called Gaillac.

I’ve tried a ton of new foods since being here: scallops, duck, zucchini, couscous, sundried tomatoes, and pine nuts (I think there are a few more that I’m missing…).

Going into Toulouse by myself was a big deal for me yesterday. I’ve never done anything like that before, not even in the US. It was strangely exhilarating, and I came home again feeling as if I could do anything in the world. It was a bit like how I imagine Felix Felicis is. Yes, I’m a Harry Potter nerd even in Europe.

I’ve finally been able to do a bit of writing. I’ve been trying some prompts with a friend, and between that and the ways I’ve been getting out of my shell, I’m finding that I actually do have some things to say again. Right now I’m working on a how to piece, and I’ve gotten some work done on a piece that has the same characters as “The Woman Next Door” (in PANK 7). With any luck, I’ll actually have something to bring to my writing group in a few weeks. 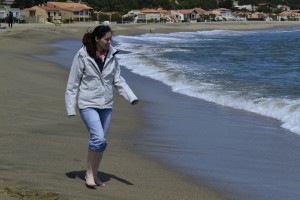 Me at the Mediterranean.

My dad suggested today that I post some of my thoughts on France. I’ve been here a week now, and I’ve actually done a fair bit of journaling (for me), so I thought I’d share some of that here rather than trying to come up with something new and clever. The following are all excerpts from emails I’ve sent or journal entries I’ve written. I’ve also included a few of my pictures.

journal entry, 5.17
I’ve been here just over forty-eight hours now. I’m still horribly jet lagged, and I’m fighting a migraine, but the sun is shining and I’m content. This morning we had croissants. Mine was delicious, but then [my hosts] apologized for not getting the really good ones. “These aren’t the good ones?” I said. Tonight we might make duck confit. I’m trying to try new things. I also sat in on a French lesson this morning. I’m not as bad as I think I am, I just need to get more confidence and practice more. One of those things, however, depends on the other.

travel journal entry, 5.16
Toulouse: Today I killed a lot of spiders. Over a dozen, probably. But the one I missed fell off the ceiling and may now be in my bed. Joy. Today was a lazy day. I walked into town with [my host and her dog], but we got rained on. Pour le dîner, j’ai mangé chicken parmesan et du vin rouge. C’était très bon. Now excuse me. Another two spiders are getting uncomfortably close to my bed.

email to my family, 5.20
I may have moved forward in the Great French Spider War of 2013 (GFSW13). I woke up this morning and found none (except for the little black one, still on my ceiling; until he provokes me, I’m treating him as a deserter). None in my room, none in the hallway, and just one dead guy, right next to my toothbrush. He definitely wasn’t there last night. I think after I demolished the forces in their frontal, aerial assault, they were demoralized. Maybe they thought to bring me the same type of fear by leaving a dead guy near my toothbrush, but what they don’t realize is that I cheer at every spider death. 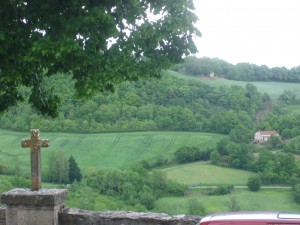 travel journal entry, 5.18
Tournefeuille: I figured I should list where I actually am, not just the nearest big city. Today we went to Gaillac, where we met with some of [my hosts’] friends and their daughter (and her daughter). Then we drove to Puycelsi. It’s a beautiful walled village up high in the hills. Some words I learned today:

email to my family, 5.19
We went to the Mediterranean today, and to Carcassonne. Apparently there’s a story about Carcassonne that says that, back when they were being besieged (is that how you say it?), they had almost given up hope, and then they fed the last pig the last bit of the grain and then threw it over the walls. The pig died, and the opposing army cut it open to find all the grain inside. They assumed that meant their siege was doing no good and that the people had tons to eat, so they left. It’s probably not true, but it’s still a great story. It was a cool city, but it’s been so commercialized. It was a bit sad, actually. Also, a lady got mad at me in Carcassonne. I asked, in French, if she spoke English, and she said, “a little,” but in such a thick accent that I thought she was still speaking French. I responded in French saying I didn’t understand, and she got mad at me. Oh well. 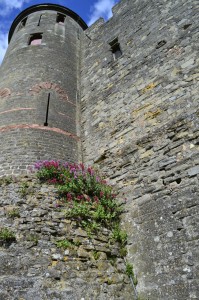 A tower in Carcassonne.

email to my family, 5.21
GFSW13 is going well! Only killed one yesterday. I think I demoralized their troops. The little black defect spider, though, may be reconsidering his choice of sides. I’ve left him alone because he’s left me alone, then yesterday he wanted to hang on near my bed all day. I can’t find him anymore. I’m hopeful he’s moved on to an area that isn’t a spider dying ground.

We stopped at the mall [today], and a woman asked me a question. I didn’t understand at first, so I asked her to repeat. She said, “Are you finding everything you need?” and I said, “Yes,” and turned around. As I was turning, though, I noticed she had a weird look on her face, and only then did I realize that what she actually said was, “Can I help you find anything you need?” Oops! I swear one of these times I’ll do well! I successfully ordered a croissant and a drink at the bakery today, so that’s something, I suppose. Of course, all I had to say was, “One croissant and a Fanta, please.”

I’ll be out of the country for the next two weeks, so I won’t be posting regularly. I’ll try for the occasional look-what-I-did-today post, but don’t count on it. Happy end-of-July everyone!