My 1001 Day Zero days ended a while back, and while I’m getting ready to start a on a new set of 101 goals (to end on the eve of my 31st birthday), I wanted to take a few minutes to talk about what I did and did not accomplish. I finished 67 of my 101 goals. Some of the goals I didn’t accomplish but still want to do (and so they will reappear on my new list), while others are no longer things I have much interest in doing. This post has a brief (or maybe not-so-brief) overview of my goals. If you want to see the complete list, that’s at http://blog.kathrynhoughton.com/day-zero/. END_OF_DOCUMENT_TOKEN_TO_BE_REPLACED

I’ve got less than eleven months left on my Day Zero project, and I’m only a bit over halfway done. So now I ask you, dear reader, to help me out. Here are some goals I still see as possible, with some help.

I haven’t stopped working toward my Day Zero goals, but I have mostly stopped updating about them. Why? Because I’m lazy. Here are a few I’ve finished in the past few months:

I’ve also increased my progress toward the following

I plan on getting to the spa soon, and on getting through a lot of the holiday-related goals. As of right now, I have 46 done and another 14 started. Still a lot to go.

March 1 marked my one year anniversary of Day Zero, so I thought it was time for a general update.

When I started this project, it seemed like a cool thing to do, and while I was careful to set goals I could conceivably accomplish (after reading the lists on the Day Zero site, I realized that a lot of people don’t take practicality into account), but I worried that I would eventually lost interest in the multi-year project. However, looking at my stats, I feel that I’m actually doing quite well, both in quantity (how many goals I’ve accomplished, how spread out they’ve been) and quality (how I feel this project has helped me at an emotional or mental level).

I have 28/101 goals completed. That works out one goal completed about every 13 days. Quick math for the project shows that I should be hitting one goal every 10 days, but I’m really not worried. A lot of my goals are for doing something over time, and so when I set the goal, I tried to think of what I could do in 1001 days. So in addition to those 28 completed goals, I have started another 15.

Finally, I have lately been giving some serious thought to changing some of the goals. Not because I think they’re too hard but rather because my life in the past year has taken me in a different direction. One example is my goal to apply to another Masters program, or to a PhD program. This is still a goal of mine, potentially, but as I plan out my education/career/writing goals, I’m finding that this isn’t something I want to tackle quite yet. Another example is my goal to travel to Vegas—I’m really just not that interested in Vegas these days. I’ve been toying with the idea of changing these (and possibly one other) to different yet similar things. For instance, “Go to Vegas” won’t become “Go to Detroit,” but rather some other destination that requires planning to get to but that I’m much more interested in seeing.

I’m still undecided about whether I’ll be editing my list. On the one hand, the official Day Zero site lets you edit even after you’ve begun, and it seems like the spirit of the project to set goals and meet them, generally, not to set one specific set of goals and go after those no matter what other paths life may open for you.

So here’s my question to my readers: What do you think about potentially editing the list a year after beginning? And if you do think it’s within the spirit of this project, what types of goals are similar to “apply to another masters or PhD program”?

I’m only about seven months late, but I figure better late than never. My dad sent me an email last night asking why I hadn’t updated my list. I’ve actually been meaning to update for a while, but I let it grow and grow, and the update got bigger and bigger. I’ve actually been working on my book lately, but it’s seemed easier than doing this. But anyway, here is a list of the goals I accomplished while in Europe.

45.   Have fondue
Technically I did this before going to Europe, at The Melting Pot. We went as a graduation celebration dinner. However, it’s on the list because I did it again in Europe. At Michele’s house we had cheese and chocolate fondue. However, I’m sort of hoping we do this again at my house. I love fondue.

54.   Order a meal completely in French
I can’t remember if I did this at the place where we had pasta or pizza, but I was able to get through a whole meal ordering in French. I might have made one quick slip (I think I did), but I did pretty well, and I won’t get another chance, so for the purposes of this goal, I’m calling it a success.

59.   Explore Paris
Except for the part where I almost got beat up by a Parisian because we bumped into each other, the Parisians were nice (overly nice, some of the men…I have beautiful eyes, apparently). Paris was beautiful, and it was fun to explore the streets, the Metro. I wish I’d had more time.

60.   Ride a train
My sister and I took the TGV from Switzerland to Paris. It did not go as fast as all my French books told me it would. This made me sad. Also, the Paris train station was a very stressful place.

63.   Buy and wear a cute summer sun dress
I bought a new dress to wear for graduation, and while I wore it in Washington, it’s more fun to call this goal met when I wore it in Paris.

And that’s that. I might have missed one or two, but I’ll get to them later. I’m writing this post as I watch the last few episodes of Dollhouse, so I’m a bit distracted right now. 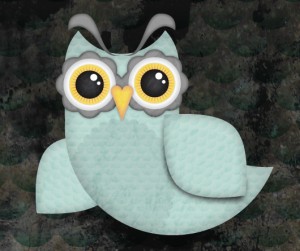 One of my Day Zero goals is to do 15 different design tutorials. As I only recently acquired Adobe CS5 (thanks, Danielle!), I’ve spent the last year or so saving interesting looking tutorials, but last week I finally finished my first one. If you’ve got any interest in this type of stuff, definitely be sure to check out Chris Spooner’s awesome blog; the owl you see here comes from following one of his tutorials.