A few random things that have been knocking around in my head lately.

1. Where are all the giving trees? One of my Day Zero goals has been to donate off a giving tree, but the one that’s usually at the mall was not set up this year. It’s less than two weeks to Christmas, and my Day Zero challenge finishes next November, so I think I’m going to have to mark this goal up as a failure.

2. As of yesterday, I have added another business to the list of places I try my best to not do business with. Dominoes, Amazon, and now Lowes, though I’m sure there are others that I just can’t think of right now. This holiday season, while I am buying two gifts from Amazon (couldn’t find elsewhere), I am still doing most of my shopping at small or locally owned businesses. Some days it seems like I’m single-handedly trying to keep Schuler Books and Music in business.

3. I don’t have a problem with being told “Merry Christmas,” but I do have a problem with the assumption that it doesn’t bother some people. Even though I’m not religious (I think some of my family still don’t know this, but seeing how I haven’t said Grace or gone to church in years, I’m hoping this isn’t a bombshell), I was raised in the Christian tradition and am therefore in the majority in this country. I can only imagine, therefore, that for some people, constantly having your religion overlooked and forgotten is frustrating and painful.

3.1. I was thinking the other day that I’m much more interested in the stories that surround Chanukah than I am in those surrounding Christmas. I have theories as to why I feel this way, but I think I’ll leave those unsaid. When I mentioned these thoughts to my dad yesterday, he arched his eyebrows and said, “Are you sure you want to write that?”

4. Gift giving is hard. I’m realizing, as I get older, that a lot of the gift buying I did as a kid/teenager was probably crap. I think I bought a lot of gifts that cluttered people’s houses and that they didn’t want. These days I try really hard to get people things they will like, appreciate, and use, and I’ve noticed that gift giving has gotten increasingly difficult.

5. A sad thing about the holiday season is how good television shows stop airing new episodes. To make room, I can only assume, for all those holiday specials. The next episode of Once Upon a Time isn’t until January!

6. My dog Molly apparently hates the Christmas—or at least Santa Claus. She ate a Santa hat today. And she did not like the reindeer ears I put on her while we decorated our tree. As an aside, my cats also refuse to wear hats. 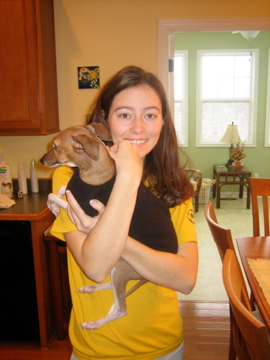