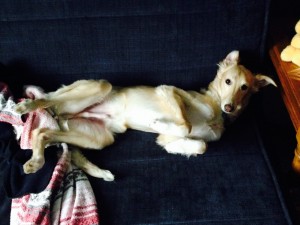 This is Liam. Yes, he does sleep like this sometimes.

As I adopted my puppy three months ago yesterday, this post is long overdue (though not as overdue as the one about my house, which I moved into three months ago yesterday but bought a few weeks prior to that). Yes, I adopted my dog the same day I moved into my house. Within thirty minutes of the movers delivering the final box, I was in the car on my way to Ohio. A little over five hours later I had a puppy and was headed north again. It would have been quite the enjoyable drive, sitting in the back cuddling with a snuggly puppy while my sister drove, but it turned out that stressed, scared, and confused puppies sometimes get motion sickness, and five hours is a long time to spend in a car when one does not feel well (or when one is being puked on). 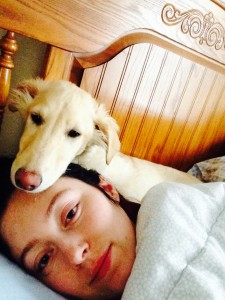 Five-month old Liam was not good about respecting people space. I don’t see this changing any time soon.

Still, Liam adjusted quite quickly to his new life. He eats well, plays well, and is social with all of the dogs and people that he’s met. He’s crate trained and potty trained (except when he drinks the entire water dish at my parents’ house) and is in a basic obedience class. He doesn’t mind car rides now, and he likes all of the attention he gets at the vet, even if he is a little melodramatic about being poked with needles. He’s a little melodramatic about a few things, in fact, though apparently eating staples isn’t one of those things. A few weeks ago he had to go to the emergency vet after eating somewhere between 50 and 100 staples. They gave him lots of attention and lots of food, and he pretty much thought it was the best thing ever. I, on the other hand, was less enthusiastic about the experience.

Other than questionable eating habits, Liam is a joy. He’s fairly calm for a puppy, and, like most puppies, oscillates quickly between playing and napping. He’s almost always in a good mood, and he’s pretty chill about going along with whatever is happening, whether it’s napping right after waking up because I have a migraine or getting snapped at by my parents’ Shiba Inu because she’s convinced everything in that house belongs to her (he’s still convinced she’s a best friend waiting to happen). The one thing he’s really not a fan of is being left alone when I’m nearby. If I go to work and crate him, he has no problem. But if he’s locked out of the dining room while I’m eating dinner with friends, he’ll sit on the other side of the baby gate and give me the worst puppy eyes. 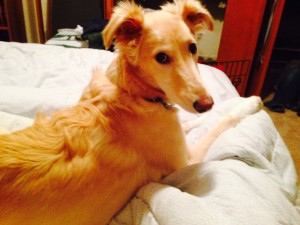 Why yes, he is the most beautiful dog ever. Thanks for asking!

Some Basic info:
Call name: Liam
Breed name: WindnSatin Ultra Violet
Breed: Silken Windhound (sighthound family)
Birth date: October 23, 2013
Littermates: 4 (3 registered)
Coloring: cream with white trim
Current weight: 30ish pounds
Favorite toy: a squeaky basketball
Favorite treat: his nightly dental chew
Loves: all people, all dogs, eating staples, chasing bugs
Hates: that the cats are not best friends with him, turning around on walks and having to walk back the way he came
Top speed: approximately 8 zillion miles per hour
Clumsiness level: 8.5/10; has repeatedly fallen off the bed or couch while sleeping
Shedding level: 1/10; every now and then he loses a hair or two
Noise level: 3.5/10; will bark when he wants to play and is being ignored; squeaks toys like no one’s business
Most embarrassing moment: when his human had to take apart her bed because he was stuck underneath it
Least favorite obedience skill: loose leash walking
Aspirations: to become friends with everyone everywhere, to be allowed to eat off his human’s plate at meal times, to sample every solid object for its nutritional value and/or chewing capacity

More photos after the cut. 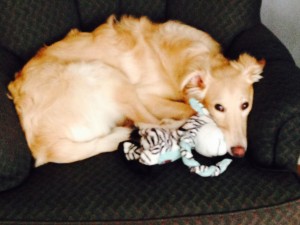 Liam with his zebra toy 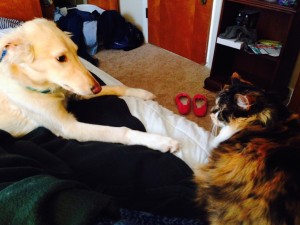 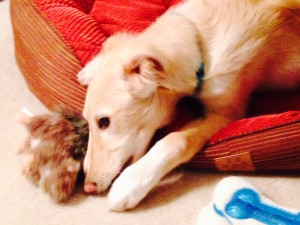 Younger Liam with a smoother coat. 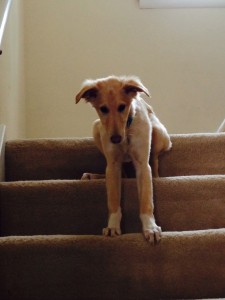 The first day at my house, learning to go down the stairs. 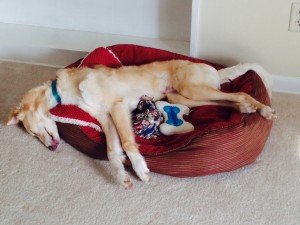 This is clearly the best way to lie in the bed.