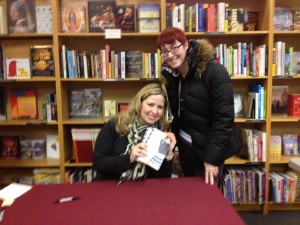 I’m coming clean. I have a literary double identity. In some crowds I’m the high-literature loving MFA grad. I put books by prestigious authors on my shelves (the types of authors that might go on MFA thesis or class book lists, not those that necessarily sell gazillions of copies). In this life I balance my reading load, trying to fit in fiction (both short stories and novels) and nonfiction, and I’m even working myself up to some poetry. I subscribe to literary journals (though I’ve let most subscriptions lapse due to budgetary issues; I should amend this). I write book review. It’s in this life that I’m working on my book.

In my other literary life I inhale Wheel of Time books, various YA novels. I listen to Harry Potter on audio book (every night before bed; it’s helped with my insomnia and also keeps me distracted when I’m in bed recovering from a headache). It’s this side of my literary character that recently drove me to dig through the boxes of books in my basement to pull out a Clan of the Cave Bear book and the two books in the Island of the Blue Dolphins series thing.This side of me wants to write a YA book some day and is tossing ideas around in the back of my head. Heck, I’ve even been known to write some fan fiction.

Now don’t get me wrong here. One of these isn’t the real me while the other is a front. I love it all. I love a good, tough read as much as a quick lighter one (and I’ve been known to walk around the house, talking to myself as I analyze both). I love the time I spend working on my book (even if it is hard as all hell), and so far I’m really enjoying exploring the new (to me) genre of book reviews. When I got the new issue of Willow Springs last week I devoured it, then tore through 600 pages of YA the next day.

But I can’t help feeling, as I switch back and forth, that I’m somehow doing something wrong. You see, I don’t know many (any?) people like me. I know genre lovers who will pick up the occasional “meatier” book, and I know literary fiction readers who will read genre from time to time, but I have yet to meet someone who feels like he or she is being torn both ways. It’s as if, when I’m reading one, I can’t wait to finish so I can get back to the other. There really just aren’t enough hours in the day for my reading apparently.

Maybe what I should do is look at this as an opportunity. I may be just one person, but maybe I can bring about a bit of change. Maybe I can get the literary fiction people to enjoy and find real worth in more genre work, and maybe I can get genre readers to turn more of their attention to those books by small presses, those books that I have to order specially from the bookstore. I’m just one person, but I figure there have to be more people like me out there, and even if there aren’t, hey—one is still better than none.

In the meantime, I’m reading The Elegance of the Hedgehog (in translation from the original French, definitely literary fiction). At the top of my figurative to-read stack I’ve got a few YA books, three adult fantasy novels (two of which I’ve borrowed and should really get to soon), a nonfiction reportage-type book, and two books of short stories. Then there’s the novel I’ll be reviewing when it’s published in April (unless I can get an ARC sooner). And the question I always ask myself is: What on earth am I going to read next?