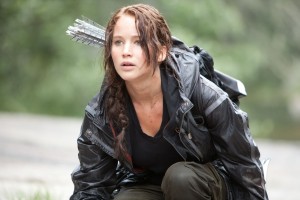 First, Jennifer Lawrence nailed Katniss. I was never really concerned about this casting choice (or about any casting choice, really), but she absolutely exceeded my expectations. What I was concerned with was the transition from first person point of view to film, since so much of what happens in the book happens in Katniss’ head. In the book, we are told how Katniss feels betrayed by Peeta when he teams up with the careers, but in the movie we see it. Same with her relationship with her mother. She hits all the nuances of this character, everything from fear (in the tube) to physical pain (the tracker jackers) to anger (the berries) to emotional pain (Rue). In the scene with her and the game makers, she transitions effortlessly from nervousness, to disbelief (at herself), to determination, to pride, to disbelief (at the game makers), to anger. Even had everything else about this movie been weak, Jennifer Lawrence alone would have made it worth watching.

The other actors all impressed me as well. Stanley Tucci was particularly wonderful as Caesar Flickerman. Wes Bentley (and the writers) made me feel sympathy for Seneca Crane, and I understood his character as a naive but ambitious young man. Elizabeth Banks was Effie, and she had some wonderful lines. Woody Harrelson played Haymitch differently than in the book, but I think it works, and I’m looking forward to see where he takes the character next. Donald Sutherland played a believable and complex villain, and I liked the glimpses we got of him during this first movie. Lenny Kravitz was perhaps the weakest for me (his timing of some lines seemed a bit off), but I still think he gave a great Cinna.

As for the child actors, not a one of them stands out to me as being weak. Willow Shields, even while most of her lines involved crying or screaming, made her character into something more than an upset child. Amandla Stenberg was just so damn cute and adorable that sometimes I stopped noticing her acting, but when I watched specifically for it on my second viewing, I was impressed. I also liked the bit of lightness she brought to the scenes in the arena (and training). Alexander Ludwig was another actor (along with the writers) who made me feel sympathy for his character—I liked seeing Cato as more than just possibly unhinged, and his final monologue was great. Isabelle Fuhrman played an intense and, frankly, scary Clove. She probably impressed me the most out of the younger actors and actresses. Foxface, Glimmer, Thresh—really, I’ve got nothing negative to say.

Now on to Peeta and Gale, though just briefly. Liam Hemsworth only appears briefly, but his closeness to Katniss is established early. The few shots of him during the games did a lot of work to establish what’s coming in the next movie. I don’t have too much to say about him, though, because we saw so little of him. Peeta though… Some people have not been impressed by Josh Hutcherson, but I contend that the issue they have is in fact with the character, not the actor. Peeta is not an alpha male. He expresses weakness, he expresses emotion. He’s vulnerable, emotionally and physically. He’s unsure and lacks confidence in himself, and Hutcherson showed me all of this. Peeta is just a quiet character, especially in this first book. If you still disagree, try this exercise: swap the genders of Katniss and Peeta. Does it feel more natural to have a weak girl? If so, then I propose that you should actually be more impressed with Hutcherson, because he portrays something so (sadly) nontraditional.

This was the most true book-to-movie adaptation I’ve ever seen, but there were still changes to the plot (obviously). However I found them all to be in service of the story. I liked the limited time spent in the cave (I was afraid it would be overdone, and instead I found myself wanting a bit more), and I loved the behind the scene shots in the capital. The juxtaposition of the revelry in the capital (and the lack of empathy from the game makers) with the brutality of the games (and especially the scene added from District 11) worked very well for me.

My main complaint about the movie stems from a few of the effects. The fire didn’t quite work for me in the parade (or during the interview), but I attribute that to lack of budget and expect these types of things to be better in the next movie. That said, the makeup, the costumes, the setting—that all really did work. I also really enjoyed the way they handled violence. I know keeping the PG13 rating was hugely important to them, but it worked for me, too, for there to not be gratuitous violence. The brutality was there to be sure, but it wasn’t overdone.

In some ways, though, the movie’s faithfulness to its source material was a bit problematic for me, at least during my first viewing. It was so true, I pretty much always knew what was coming next, and when something was different, it startled me. I also found myself comparing the book and the movie to a huge extent during the midnight showing. The second two times I saw it I was able to take the movie on its own terms. That isn’t to say I didn’t enjoy it the first night, just that it was different.

Still, the movie left me wanting more, which I actually think is a good thing. I want to leave still wanting it, and I certainly don’t want to walk out feeling like it could have been a half hour shorter. If this director and cast stay together (and if Suzanne Collins keeps helping with the scripts), I have every confidence that this will be a fantastic set of movies.

So book or movie? To me that’s the wrong question to be asking, and it sort of always has been. Yes, I generally enjoy books to movies, but that’s because the different medium does allow for different things. And in movies I always feel like I’m missing some of the complexities. But I also feel it’s unfair to think less of a movie because the book worked better. The book probably worked better because the story was meant to be told as a book. The movie is meant to be a movie, and only one based on a book. So that said, I loved them both, and I’m sure I’ll read the book a dozen more times, and probably see the movie (on DVD) that many times as well. They’re different, and I expect that going in.