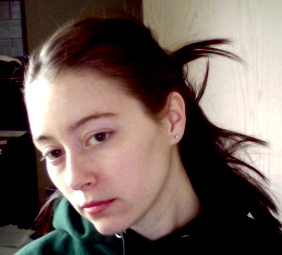 You can't see very well, but there really is a stud in there. And it's pretty.

I got my ears pierced when I was about seven. I was so scared of the piercing gun that my parents had to bribe me to actually do it—I got a set of earrings, three Boxcar Children books, and a camera. But when I hit puberty, I started having allergic reactions to the earrings, even to the fancy hypoallergenic ones, and I haven’t worn them regularly since. At one point I even went a few years without wearing them. Then, maybe my senior year of undergrad, I tried again, on and off. The holes were still there, but it was always a bit painful to get the earrings in. Finally, about eight months ago, I couldn’t get them in anymore and realized I would have to get them redone.

I had planned on waiting until I was back in MI so that I could go to Splash of Color, but I was in a bit of a bad mood on Friday and used it as a treat instead. You can’t see really well in the picture, but I’ve got studs with light blue sapphires—my birth stone. Now I just have to deal with six weeks of being stabbed in the neck while I sleep.